Co-workers in Baker’s DC region are no strangers to working in tight quarters. That experience is proving valuable on 1900 Crystal Drive, a massive mixed-use development that is in close proximity to Ronald Reagan Washington National Airport. Located in Crystal City, Virginia, the project consists of two towers — a 26-story North Tower and a 27-story South Tower — over a shared garage.

Careful planning has enabled the team to safely drive the schedule on an extremely tight site. For example, through extensive collaboration, the team has successfully completed the four planned total jumps between each of the project’s three tower cranes without hindering progress elsewhere. Architectural complexities have also required creative thinking. For example, the South Tower has a nonagonal (nine-sided)-shaped section running the entire core of the structure. Co-workers devised a formwork system on hydraulic jacks to reduce crane time and still meet their targets.

The 1.2-million-square-foot project is scheduled for completion in 2024. 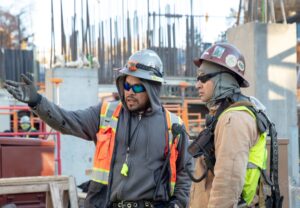 Ready to build together?

Whether you need a commercial concrete construction contractor you can trust to get the job done right or want a career that will take you places, Baker can deliver.